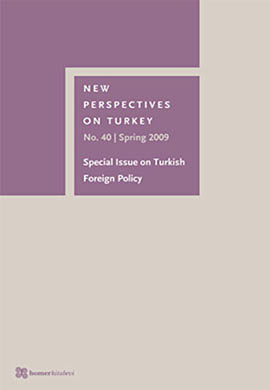 The origins of this special issue go back to a series of panels entitled “Turkish Foreign Policy in the 21st Century: Internal and External Challenges and Future Prospects,” organized by the International Relations Council of Turkey for the 7th International Relations Conference of Middle East Technical University in Ankara. Two common themes emerged from these panels.

The ﬁrst theme was centered on a discussion of the conspicuous transformation that Turkish foreign policy has undergone in recent years. In contrast to most of the 1990s, Turkish foreign policy in the ﬁrst decade of the twenty-ﬁrst century has become increasingly cooperative with and conciliatory towards its neighborhood. This is a trend that started roughly in the late 1990s and was characterized ﬁrst by a rapprochement with Greece, followed by a similar process with Syria. The peak of this transformation was probably the dramatic turnabout and overhaul of Turkey’s Cyprus policy in early 2004. Turkey’s foreign policy towards the Kurds of Iraq, on the one hand, and Armenia, on the other, was showing early signs of potential reform, when the panels were taking place in June of 2008. The visit of the Turkish President Abdullah Gül to Yerevan in September of 2008 and to Iraq in March of 2009 epitomized the actualization of these signs and represented how far this transformation of Turkish foreign policy would go.

It is these two themes that encouraged us to take up the idea of a publication. We wished to put together a volume that would address both the transformation of Turkish foreign policy in the substantive sense of the word, but also reﬂect as much as possible the growing employment of theory and conceptual tools in studying this transformation. We were also motivated by a strong wish to contribute to a growing body of competitive, conceptually sound and high-quality academic literature on Turkish foreign policy.

Turkish foreign policy literature, from both a strictly academic and a policy-driven perspective, has been growing substantially in recent years. Nevertheless, we believe that there is still much room to ﬁll, and we hope that this volume will make an important contribution of its own. Firstly, there have not yet been attempts to chart out and discuss the extent of the above-mentioned two themes that have emerged from our panels held in June of 2008. Secondly, the contributions to this volume are from senior Turkish academics with a long record of observing Turkish foreign policy. They are also academics with a deep personal acquaintance of its aspects, as well as of foreign policy-makers. Thirdly, the volume oﬀers a tour de horizon of major aspects of Turkish foreign policy-making and important issues ranking high on its current agenda. Lastly, a conscious and systematic eﬀort was made to ensure that the contributions would bring to the greatest possible extent theoretically driven explanations to the analysis of these issues