The uncertainties caused by the absence of a grand bargain between Russia and the United States are having a costly effect on both Turkey and the rest of the world, according to Mustafa Aydın, the rector of Kadir Has University.

The lack of response to Russian moves in the Caucasus led to Russia’s action in Syria, said Aydın, adding that the U.S. opened the door of the Middle East to the Russians, meaning Turkey now has a Russian presence in the north and the south for the first time ever. 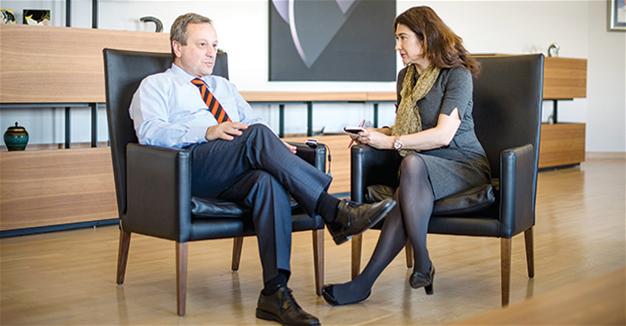 Where do you think U.S.-Russian relations are heading?

It is time for there to be a grand bargain which we have not had had since Vladimir Putin assumed the presidency for the second time. Former U.S. President [Barack Obama’s] reset policy did not work and, in fact, it resulted [in the situation in] Georgia and Ukraine. The Russians felt sufficiently confident to enter Georgia in 2008, and Ukraine in 2014. They did not see a response from the West in Crimea, and they calculated that the U.S. and the West would not respond in Ukraine either.

This is a tacit understanding – a reciprocal acceptance of the boundaries of the expected behavior. This is something that has not happened in the post-Cold War era. We need a grand bargain. Looking from the neorealist perspective of international relations, when we have a hegemon or hegemonic relations, we see a more orderly system when they agree. It does not mean it would be more fair, but more predictable. In the absence of such an understanding, you have a number of powers who are competing for influence, and that will lead to conflict. In order to avoid these kinds of wars, we need a kind of an arrangement among the bigger powers.

We need this at present because the principles and rules of the international system have decayed and been violated. Both Russia and the West are accusing each other of disregarding rules and previous understandings of behavior in cases like Kosovo, Crimea, Ukraine or Libya.


Do you see that grand bargain coming?

I can’t see it coming. There seems to have been certain overtures from the American side since there was a change of administration. U.S. President Donald Trump said during the campaign that he could work with Russia. But we do not know whether Russia wants a deal. It looks like the Russians benefit from the uncertainty; they think that they are able to manage the current uncertainty. The second issue is the uncertainty surrounding the Trump administration. They indicated that they want to do business with Putin, but we do not know what kind of deal they want. Also, are he and his team capable or able to understand the future of the international system and design it? This is the big question mark.

But unless we have a grand bargain, we are moving closer and closer to bigger conflicts.


So the absence of a grand bargain lands us in deep uncertainties then.

That’s the problem in the neighborhood but globally as well. Most of the political dynamics stem from these uncertainties. When countries are not certain about the future of the system, they do not feel constrained by the system and they start exploring.


How does the lack of a grand bargain affect Turkey?

Ukraine happened because the West and the U.S. could not respond to the Russian move in Georgia, which encouraged Russia to become more daring in international relations. Russia had been and still is telling the West that it does not want to see NATO on its border. They are in perennial fear of dismemberment. The Russians feel they need buffer zones to protect themselves. They wanted the Caucasus and Ukraine to be a buffer zone.

But they did not stop after 2014. Two things happened: Russia started testing the borders of NATO territory in Europe. They violated the airspace of even Portugal. They violated Turkish airspace in the Black Sea several times to see whether the Western alliance is ready to respond and how many seconds it takes to show a response. That’s how you prepare for a whole front war.


You are saying that this was not the case until recently?

Until 2011, Turkey was the biggest navy in the Black Sea; both in terms of number of ships and in terms of firepower. Now it is the Russians. NATO only recently started to respond to this challenge.

There is another offshoot of this development: After they gained dominance over the Black Sea, they took a step in Syria, and this was an opportunity provided to them by the Obama administration.

The Middle East andBlack Sea theaters of operations are linked because the Russian operation in Syria was logistically supported by the Black Sea from Crimea.

Almost all of the north of the Black Sea is under their control; they are in Armenia on the Turkish border and they are in Syria, where they limit where Turkish forces can act in Syria.


Is the Turkish government concerned about this?


Why should Turkey be concerned about Russia? Perhaps it does not see it as a foe?

Russia could be our friend or enemy at the same time. You have to act according to the realities on the ground.


What kind of a reality do you see on the ground for Turkey?

Turkey was very active in the Black Sea. But now the Russians control the situation and they block any kind of regional multilateral cooperation scheme. Turkey was very active in the Caucasus, with many ideas; nothing of that is left. The Caucasus countries are afraid of Russia. There is no ground for multilateral cooperation either.

When that does not exist, you have to negotiate with Russia  directly and bilaterally, and that’s dangerous.
When it sits to negotiate with a big power, a middle power like Turkey does so from a disadvantageous and weaker position.

The same is true in terms of Turkey-Russia-NATO relations. Turkey’s values in the eyes of Russia always increased as Turkey became powerful in NATO and Turkey’s power within NATO increase in proportion to Turkey’s ability to respond to Russian behavior.


What do you expect in Turkish-American relations?

They are on hold. The Americans decided to put things on hold until after the referendum. And I think they will go ahead with their plan in Syria which might upset Turkey. But I think they are thinking they can contain Turkey up to a certain point. They will take the risk, until they find out they cannot contain it any longer; at that time, they might slightly change the rhetoric and part of the plans on the ground.


So they will cooperate with the Kurds in Syria?