Conditionality, Impact, and Prejudice; A Concluding View from Turkey 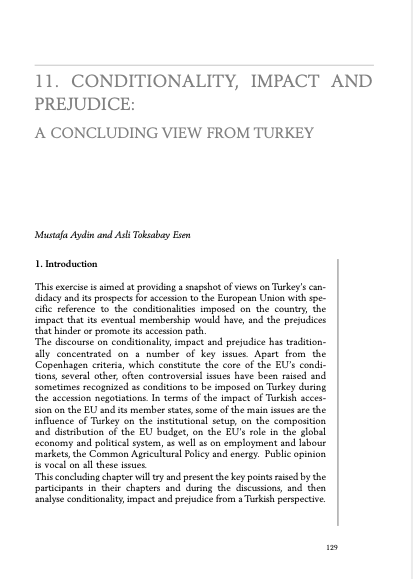 This exercise is aimed at providing a snapshot of views on Turkey’s candidacy and its prospects for accession to the European Union with spe- cific reference to the conditionalities imposed on the country, the impact that its eventual membership would have, and the prejudices that hinder or promote its accession path.

The discourse on conditionality, impact and prejudice has tradition- ally concentrated on a number of key issues. Apart from the Copenhagen criteria, which constitute the core of the EU’s condi- tions, several other, often controversial issues have been raised and sometimes recognized as conditions to be imposed on Turkey during the accession negotiations. In terms of the impact of Turkish accession on the EU and its member states, some of the main issues are the influence of Turkey on the institutional setup, on the composition and distribution of the EU budget, on the EU’s role in the global economy and political system, as well as on employment and labour markets, the Common Agricultural Policy and energy. Public opinion is vocal on all these issues.

This concluding chapter will try and present the key points raised by the participants in their chapters and during the discussions, and then analyse conditionality, impact and prejudice from a Turkish perspective.