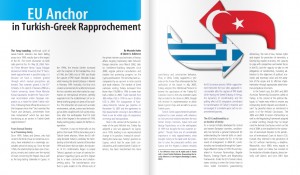 The long-standing conflictual cycle of Greek-Turkish relations has been fading away since 1999, mostly due to the impact of the EU. The recent discourses on both sides point to this. On  May 28, 2004, Turkish Prime Minister Recep Tayyip Erdogan declared at Oxford University that “If Turco-Greek rapprochement is possible today, it is because we have a common ground through which mutual perceptions are formed.